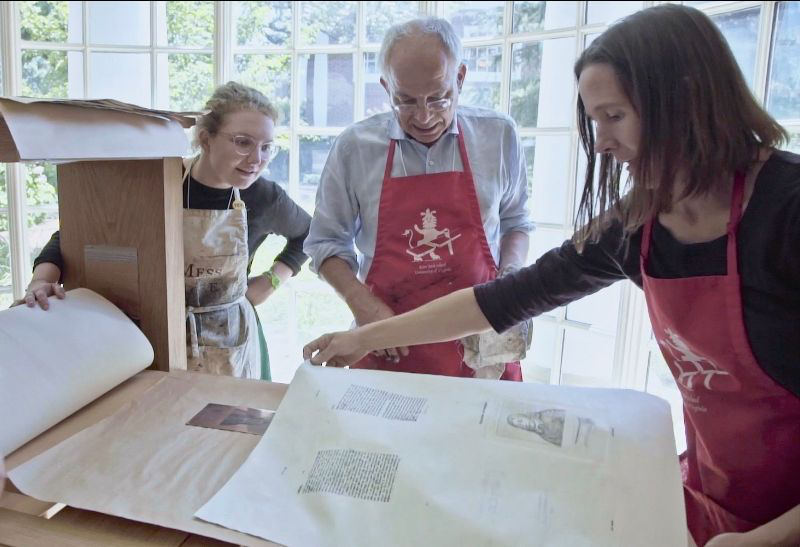 Rare Book School have released a video featuring the wooden rolling press which John Milnes and I constructed in Oxford. The press is based on the designs published in the Encyclopédie in 1769. The following extracts from my original pitch for building the press explain the genesis of the project which grew into Rare Book School’s ‘Presswork’ program described in the press release for the documentary copied below.

The acquisition of the rolling press was a catalyst for Rare Book School to move their replica common press from the obscurity of the dingy second floor corridor of Alderman Library to a well-lit public space off the entrance hall in the Albert and Shirley Small Special Collections Library. Visitors to the library can now see both presses; the only types of press used to print and illustrate all books until the end of the eighteenth century. With the help of Erin Schreiner, now secretary of the Bibliographical Society of America, the press was set up in 2017. Erin and I subsequently worked together on the displays in the pressroom and explanatory leaflets.

The presses are regularly used for teaching. In my own class, The Illustrated Scientific Book to 1800 which I teach with Caroline Duroselle-Melish of the Folger Library our students print a quarto gathering and illustrate it with an engraving printed in a space left in the text as well as an inserted plate.

Before being moved to Charlottesville, the rolling press was used in a video, The Rolling Press for Pictures, commissioned by the Folger Library for inclusion in the exhibtion ‘Beyond Words: Book Illustration in the Age of Shakespeare’ which Caroline curated. The film includes scenes of printing on an original eighteenth-century common press in the Bodleian Library.

Extracts from my proposal to Rare Book School to build the rolling press.

Bibliographical teaching presses are well established in numerous universities, but very few include rolling presses for printing intaglio plates [1]. Bibliographers are paying increasing attention to book illustration so experience of printing on the rolling press should now be as much a part of bibliographical instruction as the use of the common press. For the whole of the hand press period rolling presses were wooden presses (used alongside iron presses into the late nineteenth century), but in marked contrast to the common press, of which there are numerous working replicas, there are no wooden rolling presses in operation for bibliographic teaching and research. The few surviving original wooden rolling press are not operational and I am aware of only three replicas, only one of which is used to demonstrate intaglio book illustration, and not in an academic context.

Again in marked contrast to letterpress printing, almost nothing is known about the day to day operation of the rolling press for book work. The engravers manuals as well as the secondary literature on engraving and etching are almost totally silent about the technical, organisational and economic relations which made possible the decoration and illustration of a vast array of publications over a period 400 years [2]. And what little experience bibliographers have of intaglio printing has invariably been gained on late nineteenth or twentieth-century iron presses, mostly in fine art departments, and telling described as ‘etching presses’. What the implications of printing on a wooden press, as opposed to an iron press, are we simply don’t know. Almost anything we learn from the practical experience of operating such a press would contribute significantly to bibliographical knowledge.

In what follows, it is proposed that a wooden rolling press should be constructed on the basis of the designs published in 1769 in Diderot and D’Alembert’s Encyclopédie. The proposed historical reconstruction would be the first to be built for teaching and research in bibliography and the history of book illustration.

The press illustrated in the second plate illustrating ‘Imprimerie en taille-douce’ Encyclpédie is labeled on the plate as a development of the old design, which is illustrated on the first plate. [3] This is in fact a copy of the image published by Abraham Bosse in 1642 [4] showing a press which he described and illustrated in more detail in 1645 [5]. The text to the second plate explains that in the new press (‘la presse de nouvelle construction’) the cheeks are wider; the diagonal braces are replaced by a second pair of columns supporting the arms of the press; and instead of the two rollers having the same diameter, the lower roller is larger diameter than the upper roller. To a large extent this follows the designs given in Cochin’s 1745 revision of Bosse [6].

There are a number of reasons for choosing the Enclopédie image as a model. First, we can assume that it is an accurate engraving either of an actual press, or a composite of presses actually built to Cochin’s design. The draughtsman was Louis-Jacques Goussier (1722–1799), known as ‘the third encylopédiste’, whose practice was to visit workshops and make drawings on site [7]. Besides he would have regularly interacted with copperplate engravers and printers and must have been very familiar with their equipment.

The accuracy of the image is confirmed by the striking similarity of the large press now in the Chalcographie du Louvre. Secondly, following the engraving rather than a surviving press means we are building a press, as it would have been new in 1769, not one that has suffered from extended use and subject to repairs and replacement parts. Thirdly, we would be building something different from the replica presses so far built (see Appendix below). The experience gained from those projects can be built on, while new knowledge would undoubtedly come from the experience of building a press with different features.

Development of the design will come primarily from the Encyclopédie backed up by examination of surviving French rolling presses in Paris and Boston. The size of the press is not specified in Encyclopédie plate. The text on printing intaglio plates published two years earlier implies a press similar in size to that described by Bosse in 1645. This would make the press 1.38m high, 1.02m wide and 1.25m long (54 x 40 x 49 inches) with a plank. Although it is not clear that the text refers to the new design, it seems appropriate to use this scale, which would have been appropriate for everyday book work. A surviving press of similar design now at The Printing Office of Edes and Gill in Boston is smaller (see Appendix, no. 3, below); the Chalcographie du Louvre press is larger. The main difference in the Paris press, probably associated with its larger dimensions, is that it has a six armed star wheel, rather than the traditional cross.

Following Bosse, the Encyclopédie specifies the timbers used as well seasoned oak for the frame (presumably also for the cross), quarter sawn walnut or elm for the rollers and walnut for the table or plank which moves between the rollers. As a historical reconstruction to function an experimental test bed for investigating contemporary printing, we want to use materials as close to the original as possible. Having discussed the requirements with Geoff Tyler of Tyler’s Hardwoods in Wiltshire and examined some samples, it is proposed to build the frame of American oak and the rollers and plank of American black walnut. I was at first been keen to use European timber, but American oak being more homogenous and more stable is available in larger sizes so that the frame can be built from solid timber. The rollers on the other hand will need to be laminated as it is not possible to obtain solid quarter sawn timber of sufficient diameter. American timber harvested and seasoned in the twenty-first century is not going to be the same as that obtainable in eighteenth America, but it is agreeable to think that this will as close as possible to what an American returning from Paris might have had built locally, both in terms appearance and function. This should be contrasted with the use of laminated reclaimed timber for the frame and laminated bamboo for the rollers in the ‘Blake’ press (Appendix, no. 2) and reclaimed pitch pine frame and beech rollers in the Edes and Gill press (Appendix, no. 3). The importance of the timber is stressed by Anthony Dyson who discusses the properties of different woods for the rollers and notes that some iron presses were still supplied with wooden planks, probably mahogany, in the 1830s [8].

Presswork: A Documentary
What can eighteenth-century facsimile printing presses teach us about the history of printing and technology, and about the roles that printing technologies play in the production of knowledge? “Presswork”, a public-facing program established in 2018, seeks to introduce scholars, students, and members of the general public alike to hands-on printing with historical presses. The program was created by RBS in collaboration with UVA’s Albert and Shirley Small Special Collections Library, and has been funded through a grant from the Jefferson Trust, an initiative of UVA’s Alumni Association.

The following documentary describes the scope of RBS’s “Presswork”program—charting how the project began with RBS’s commissioning of a wooden rolling press, modeled and designed after diagrams published in Denis Diderot’s famous Encyclopédie (of which UVA owns a unique copy, annotated by Diderot himself). Currently, no other university in the world has two eighteenth-century period presses positioned side by side, allowing faculty, students, and visitors to compare, in a hands-on research setting, the intaglio and letterpress technologies that were necessary for producing the illustrated books that Thomas Jefferson and his contemporaries read. As the documentary illustrates, these presses were essential for interpreting how early modern and Enlightenment-era printers worked, how books and prints were fashioned, and how those processes influenced the culture of learning that fostered the growth of libraries and universities.

Appealing to audiences far beyond the small circle of professional bibliographers, the presses have captivated students, who teach with them as part of a student-led learning program, and as part of a larger outreach program geared toward engaging the general public. “Presswork” provides custom teaching labs for UVA courses and visiting groups, while training UVA undergraduate and graduate students in the technologies of printing through its RBS-UVA Presswork Fellowship Program. “Presswork” also hosts events, such as open houses for the local community. The program continues to spark new conversations, projects, and research on Grounds, fostering exciting collaborations around the legacy of hands-on printing technologies. We look forward to resuming our programming when UVA reopens.